In the battle of minds, Flintoff holds the key 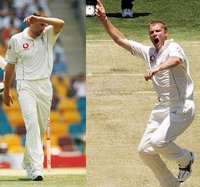 First Test, Brisbane
Day 2 Comment
If you ever needed proof that much of test cricket is played in the head, look no further than England’s two strike bowlers. Flintoff and Harmison have all the potential to be world-beating quicks. Both have abilities to make a decisive impact on this series. But while Flintoff is revelling in carrying his side, Harmison is struggling with himself.

So much of Ashes cricket is about stamping authority on the opponents, thriving on the contest and dealing with confrontation. Harmison’s struggles are continued fuel for debate but it has been clear all tour that he is desperately low on confidence. Flintoff meanwhile is a different being. His strength of mind shows in the way he charged-in to Australia's batsman all day. Questions of confidence have never entered the equation. Yet Flintoff has bowled far less in the last six months than his Durham peer.

Looking back on this test match – which is all but decided now – many will cite that infamous first ball on Thursday. If the statement had to be made in that first over of the series, surely Flintoff was the man to do so. To play on a ground where Australia have always been dominant, and to take it upon himself to launch the Ashes would have been the best way for England - and Flintoff - to stamp authority on this series. Instead they opted for somone desperately short of match practise and vulnerable to gremlins when the chips are down.

It was a horrendous error of judgement that exposes the muddled thinking among England’s backroom staff. While we were driven to distraction about England's potential lower order batting woes, there has been failure to recognise that with so many bowlers coming back from injuries and lengthy layoffs, it is not the batting that needs propping up, it is the bowling.

What are these extra 30 runs that Giles is capable of providing down the order worth, when the opposition has amassed 602-9 declared? Giles toiled away admirably, bowling the dependable dross that has lent him a fantastic career. But what would Flintoff have given for the attacking and controlling presence of last summer’s highest wicket taker? Leaving Monty Panesar watching on helplessly from the dressing room, while Pietersen turned the ball is a decision that Fletcher will regret.

Hindsight is a curse for decision-makers, but a gift for commentators. Looking ahead, any chance for salvaging a result from this test ended yesterday evening when Strauss ended up pulling thoughtlessly down deep square leg. Now it it is essential for England to regain ground in the psychological battle. Bell must replicate the classy authority he showed this summer against Pakistan in the cauldron of Ashes pressure. Pietersen must show his resolve to stay at the crease long after Australia’s fiery spells of the opening session. Keeping the aging McGrath in the field for two days will do England’s chances no harm for next week’s second test.

England must prove to Australia – and perhaps themselves – that they are capable of taking this Ashes challenge head-on and coming out on top. If not for this test, than for the sake of the series.

Woah...this is after bad news...but I'll continue as I was originally.
Basically, from my limited knowledge of the game, I reckon you've hit a nail on the head here.
The nail I think you're banging on is the psychology of this. This first match is only essential for mental reasons. If we can hold out enough to get a half decent score, we can prove we're not going to stop fighting. If we get thrashed, then we've got to come back onto the pitch next week all guns blazing, fighting a no doubt overconfident team of Aussies.
This test may be over...but the Ashes are still ours...and I'll be damned if I'm letting them go without a fight.
I tell you...if me and you were playing this game Sahil we could take on the whole team single handedly using nothing but my optimism and your arm.
Easy.

Ok...we're screwed...abso-bloody-lutely screwed. Let's hope this is all an elaborate ruse from the England team to make the Australians think they can play the next test whilst hammered and still win.
Then we'll reveal our true strength.

Exactly, the best part of the game is played in the head, and we're losing it there before we even step on the field.