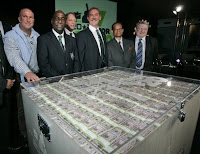 SkyBet instructed me, every two minutes when I watched the tennis last night, that sport, apparently “matters more when there’s money on it”.

That is the pillar on which the entire Stanford “ Twenty/20 for 20 ” farce is built upon. In a match bereft of any meaning, it’s hoped that injecting it with vast sums of cash will create some excitement. As Simon Barnes noted: this is not sport, this is a crass (un)reality show.

For most of the millions of people who were possessed by the final this year, or that series in 2005, money was never a factor. Perhaps those were heady days. Now, in this absurd era of $20m matches and credit crunches, maybe our perspective cannot go further than our wallets. But when King Kev launched his frantic, chancey and breathtaking counter-attack after lunch on day five at the Oval, I doubt many were enthralled by the potential financial benefits. Great sport has a value system that translates into no other.

This afternoon, the selectors (for which read KP) announce the 15 people that are to be hired out to a Texan billionaire. For some of those this will be a life changing, bank breaking moment. For the rest of us, the ‘match’ couldn’t matter less.

It should have been a fanfare, a tearful, emotionally-charged mass media farewell to one of the greatest batsmen to grace the game. But then, that was never his way. The quiet man could never quite turn up the volume. And so it is that after 25 years dominating the English game, Graeme Ashley Hick has announced his retirement.

For decades, the six-and-half-foot giant plundered county attacks with a brutality that could never betray his fundamental gentleness. Instead it took the Test game - as it always does – to ruthlessly reveal his inner character.

He was and remains an unnervingly popular figure. Hick never commanded adoration as, say, Flintoff does now. Instead Hick drew obsessive fans. That he could never quite understand his own failings at the highest level made him all the more interesting. Perhaps in today’s era where masculinity is more ready to embrace humanity he would have faired better. The thought of Pietersen fussing, caressing and cajoling him through the early days of his Test career can only make you wonder what could have been. Now though is not the time to dissect his Test career (again). Instead this is a personal moment for Hick and his fans.

My most recent memory of Hick was a couple of years ago, when I got the chance to see him play at my club in a charity match*. Having practiced my lines and delivered them perfectly to everyone around me, I finally drew up the courage to walk up to my childhood God and tell him how much he meant to me. I tapped him on the shoulder… and absolutely panicked. My legs disappeared under me, I stuttered and stumbled and barely said a word.

The great man looked at me bemused, but surely he could see a hint of what I did – a faint reflection.

*In that charity game, Hick was faced with the prospect of a young girl bowling at him. As always, debilitated by his kindness he ended up lobbing a gentle catch to cover. And once again I’d seen the player I loved most fail.