War of attrition as Clarke kicks in 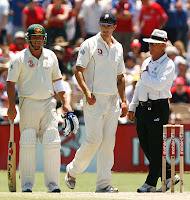 England started the day knowing a quick wicket could open the door to a series-levelling victory. The Aussies knew that if they could that overcome this threat they first made the game safe, and then if they batted well enough, create an opportunity to bowl England out. With so much at stake both sides started tentatively. It was England, however, who first hit the mark and, for the first hour, bowled with great discipline, pinning down two of the fastest scorers in the Australian side.

England deserved some luck, but found none as catches fell just short and a Hoggard's lbw shout against Gilchrist was turned down. Eventually, Flintoff needed to rest which brought Harmison into the equation. And promptly the pressure released.

Harmison has improved from Brisbane, but if even if I turned up to bowl, it would be an improvement from that game. Gilchrist cut loose and Australia dominated the second half of the morning session. England were lucky to get him, just before lunch, when he launched Giles needlessly into the hands of Bell.

It brought Warne to the crease and he was welcomed with a volley of chat, that, well, only he could imagine. It was enjoyable to watch, though slightly surprising to see that Warne, who dishes so much out, seemed annoyed about getting some back.

It was a brilliant mornings cricket, England were striving for an elusive wicket which seemed just a ball away, before Gilchrist counter-attacked as only he knows how.

England continued to be frustrated, particularly by Michael Clarke, who has played as well as I’ve seen him for his impressive 124. He will surely take Martyn’s spot when Watson comes in at number six.

It was not until Hoggard removed Warne just before tea and mopped up the tail quickly thereafter that England made any real headway in the day. You will continually hear about Hoggard being an underrated bowler, but anyone who has watched England over the past couple of years will be familiar with his brand of unfashionable, consistent and occasionally brilliant fast-medium bowling. Indeed a glace at the ICC World Rankings, will show he is rated as the fourth-best fast bowler in the world. His bowling here was nothing short of phenomenal, and is likely to be the best performance by a quick bowler this series. The pitch was an absolute grave-yard yet he still ran-in for two days and picked up seven wickets.

England were left to survive a tricky 19 overs at the back-end of the day. The only casualty was Cook, who was caught behind off Clarke. Alistair Cook is an mature person and talented batsmen, but he is going through the learning phase that every player has to. England must stick with him even if he continues to struggle, because as Bell is showing, learning in the Ashes may be hard, but you come through it mentally and technically stronger.

Warne turned the ball and sledged sharply last night, which sets up yet another crucial morning session. After their dominance for much of this match, England would not want to give the Aussies a sniff of victory in this game. To ensure this they must bat two sessions. In the end this hopeless pitch should be the winner, but provided nothing goes wrong tomorrow, England can draw much confidence from this test match.
Posted by sahil at 18:56