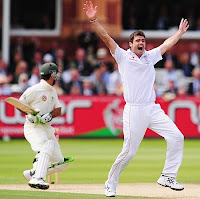 It had to be now. James Anderson has been in and on the fringes of Test cricket for six years. Having promised much for the past year, this was the series he had to deliver.

He is a complex character, Nasser Hussain found it “impossible to get into his head”, the hardest person he ever captained. Nass needn’t have bothered: the answers were in the skies.

Jimmy is a Burnley lad and, fittingly, nothing cheers him up more than grey skies. They bring the swing that transforms his game. Earlier today he again had to reprieve the England batsmen. His unassuming presence off the field can mask his steel. The Cardiff heroics were today followed by a clever, counter-attacking stand with Graham Onions. It was apparent in his shot selection that he understood the game situation. Given the conditions yesterday 425 was horridly below par, under dark coulds however, it looked a lot brighter.

Many felt before this series that if England were to be successful, Anderson had to be key. Over his punctuated career he has been unable to find the consistency and wickets that define leading bowlers. As ever the margins are decided in the head. In the past year he’s had the responsibility of leading the attack. Forcing an introverted character, under the glare of Test cricket, to carry a weak attack was a decision forced on England. Yet it has worked wonders for Anderson.

Today, he never more than threatened swing, but maintained control and changed the angle from the crease well. He was aided by some loose batting from Australia. Hughes, Clarke and North will be disappointed with their dismissals.

The question that could decide this Test and possibly the series, is what Anderson can do when the skies clear. England have had much the better of the conditions so far. Should the sun shine on Ricky Ponting tomorrow, England, haunted by the memories of Chennai, will be praying Anderson can lift them.