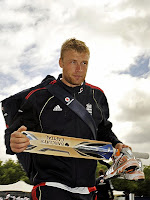 It seemed, as Flintoff creaked into his 35th over at Cardiff, that his captain was bowling him to an injury. Worse, Strauss succeeded in bowling Flintoff into early retirement.

Truth be told, this was on the horizon for a while. His fitness and form since 2005 has been a travesty. Time and again the cycle of injury, gloom, rehab and hope gripped the England side's perennial search for 'balance'.
It was Lawrence Booth, in his insightful weekly column, who first questioned the point of it all. Now journalists and punters alike readily cite the fact that England win more games without 'Fred' than with him. Statistics, though, are full of quirks. Flintoff struggled through the top sides - South Africa, India, Australia - but was left rehabilitating as others gorged on West Indies and New Zealand.
This however, cannot mask the fact that Flintoff only ever flirted with greatness. For three years under Michael Vaughan, culminating in that series he was possibly the most valuable cricketer on the planet. Since, he has failed to be the force on the field that he is off it.
While in an England shirt, Flintoff couldn't prevent forcing his body beyond endurance. He carried not only his colossal frame, but a toothless attack. Yet off the field, the riches from 2005 and frustrations of injury led to an increasingly public presence away from cricket. Perhaps the fire that drove him to the top was fading as he sought fortune and entertainment elsewhere.
The tragedy is that this series had appeared to light the embers once more. He was better prepared than any since 2005, was batting well and thundered in bowling faster than ever. Alas, his body duly resisted.
He deserves a vintage performance to close his Test career and could yet inject himself to fitness for the remainder of the series. Sadly public figures, sportsmen especially, rarely get the exit they desire. Whatever happens, Test cricket, shorn of Flintoff's brutal brilliance, will be a poorer sport.
Posted by Ashesinsomniac at 12:41

Hold on pal. "Poorer sport"? I’ll miss Freddie, but there's enough talent in the lockers of Test Match cricket for it not become a permanent setback for the sport.

Perhaps I was getting a little watery eyed! There will be plenty of good, equally gifted bowlers to replace him.

Yet, Flintoff was the only England player of his generation to inspire and carry a crowd. I can't think of any England player who would create the verve of, say, his tussle with Kallis last summer.

I think test cricket, especially in England, will miss that.

Freddie was genuinely imposing during his first bowling spell of the 1st test, and in fairness it was the only time England looked threatening in their attack. However it was hard to see him sustaining that level of effort throughout the test, let alone the series.

I am looking forward to a hopefully memorable swansong, he deserves to head out like the champion he has been.

Interesting choice of words with 'inject himself to fitness'.

He deserves to out on a high for his past performances, but the timing of this decision is poor.

Also by 'inject himself' I meant to say that I think he will be unfit, but will mask the pain with plenty of injections.

Yes it was great - Well done to the openers, however it's a shame for England that they are still losing so many cheap wickets.

Some sloppy bowling from Johnson, but it might be a bit early for major concern on his form?

Let's hope the weather doesn't work against England this time, and we should have an exciting test on our hands.

Very much enjoying your well written and thoughtful posts. Yes, Freddie will be missed, he's wears his heart on his sleeve and has added something less obvious to the team than simply his talent - witness his human kindness towards Brett Lee in 2005. He could have stood up to clap Strauss when he reached 150 though yesterday, or was he resting those knees...? Jonathan

Cheers Jonathan, and thanks for the alerting me to the spelling!

Today was an excellent example of everything Fred can bring. Those dear knees would have been severely tested but his spell helped set Anderson up.

I just hope England can bowl as well when the sun shines!

England shouldn't struggle to knock over the last 2 wickets, and in any case it's very hard seeing them add another 70 plus runs to the board. Haddin and Johnson were our last hope for any sort of 'decent' 1st innings partnership.

It's going to be a thrilling day 3 - will the follow on come into play? Could Aus somehow hold out if forced to bat again? What will the weather bring? Not sure what the bookies are saying but this has to be ripe for a morale boosting England thrashing now.

I hate to say it but if England can maintain fitness this has 2005 written all over it.

Test cricket at its finest!