Does mongrel make a difference? 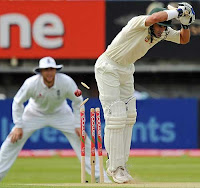 Sport is one of those things that makes 'experts' of all us. Armed with little more than an armchair and a pint we're transformed into the love-child of Brearly and Warne.

Today, experts from the pub to the media centre unaminously unravelled the mystery of Australia's limping tour: misplaced 'mongrel'. No doubt related to that slippery aura they can't locate, Australia apparently have lost the agression, fire and filth that made them a great side.

But do body language, sledging and Jelly Beans really matter? If you have the tools, probably not. Warne & McGrath could have bowled sides out without uttering a word. That they did sledge, and to great effect, was still product of their talent. But if you have a side lacking world-class ability, inspiration needs to come from elsewhere.

When Hussain and Fletcher took charge of England, their first effort was charged at improving the physical presence of their team. They stuck a backbone into a flaccid team by insisting on stronger body langauge and stronger words.

To win games you need to exert your character and belief over the opposition. Today Australia failed to do that.
Posted by Ashesinsomniac at 19:11